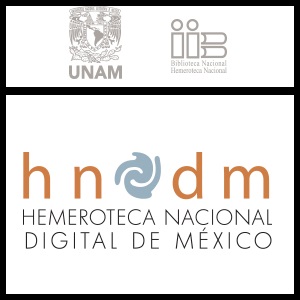 The Hemeroteca Nacional Digital de México is the online repository of digitised printed material from Mexico. The digital collections were derived from materials belonging to the Fondo Reservado (special collections) of the Hemeroteca Nacional (National Newspaper Library). The Hemeroteca Nacional and the Biblioteca Nacional (Mexico’s National Library) are under the stewardship of the Universidad Nacional Autónoma de México (UNAM), Mexico’s national university, and both the physical and digital collections are housed and maintained on campus. Planning for the HNDM began in 2000. The project focused on digitising the National Newspaper Library’s microfilm collection, which was created in 1960. Work began in earnest in 2002 and the first version was made available that same year, with restricted access. Since then, the HNDM has undergone several system migrations and new designs, the latest one being in 2015.

The HNDM includes the newspaper collections belonging to the Fondo Reservado (special collections) of the Hemeroteca Nacional.

Microfilming began at the Hemeroteca Nacional in the 1960s, when the National Newspaper Library was moved from downtown Mexico City to the new, purpose-built facility on the UNAM campus in the south of the city. The microfilm collection has two copies for each newspaper, one in silver halide for preservation purposes and the other in diazo film for public lending. Currently there are approximately 28 million microfilmed pages.

Although plans to digitise the library’s microfilm collection began in 2000, finding a company in Mexico City that had the equipment and the experience to do the work proved more complicated than expected. Eventually, a company based in another Mexican city began work in 2002. The same company undertook the OCR as well as the digital platform and hosting. In later years, the system was updated by UNAM and the system migrated to UNAM servers.

The project was designed to include digitisation of the complete microfilm collection. This was founded on the idea that the materials on microfilm had already undergone a selection process which was based on the following criteria: the newspaper’s degree of conservation, demand, and historical, heritage, journalistic, and documentary importance. One of the main problems in the early stages was that there was not a reliable catalogue of the microfilm collection that included the technical micrographic characteristics for the physical artifacts as well as their state of conservation and the metadata about the newspapers themselves. Therefore, the quality of the microfilm varies leading to variation in the quality of the digitised images and OCR.

The library continues to use microfilm as its main preservation strategy for the newspaper collection. In recent years the library has turned its attention to the digital preservation of the approximately 8 million original digitised TIFF images from which the HNDM collection is created.

Currently, the HNDM has almost 8 million digitised pages from 941 newspaper titles between 1722 and 2006. Out of these, 516 titles (1722–1889) are open access, and 425 (1890–2006) are restricted and can only be accessed from inside the newspaper library’s facilities and on campus. The microfilmed and digital archives can be found in the National Newspaper Library’s Fondo Reservado (special collections), which includes Mexican periodical publications between 1722 and 1917, foreign periodical publications from 1665 to 1920, the Garcia Valseca collection and the newspaper miscellanea and important newspapers microfilms collections. Newspapers from the long nineteenth century, 1800 to 1914, contain 771 titles and 2,069,247 pages.

According to an analysis by the Dirección General de Cómputo y de Tecnologías de Información y Comunicación at UNAM (the National University’s Computing and Communication and Information Technologies General Office), the OCR average success rate is 54%. It was found that 72% of the images have good readability, about 15% regular, and 13% poor. The image quality was 56% good, 34% regular, and less than 10% poor.

The HNDM’s digitisation was obtained from 35mm microfilm rolls that the National Newspaper Library created. Publication stills have been reduced relative to their original size and contain between 140- and 180-line pairs per millimeter (pl/mm). This reduces the impact of the deterioration of paper and ink tones from the original documents over time and produces a better contrast. To create the HNDM collection, every page of every item from the newspaper was digitised as a bitonal TIFF image.

The HDNM backend structure has been modified several times since its creation in 2002. The current platform was developed in-house in a collaboration between the UNAM’s central computing services and the library’s computing service department. This collaboration was launched in 2011. It is held in a MongoDB v.3.6 database and Solr for indexing. This database is in JSON format, with metadata descriptions of the collection, publication, item, page, and publication; it does not include the actual OCR content. Work on the platform is ongoing and new modules are being developed, particularly ones that allow the library to administer the digital collection, such as uploading new images, adding or modifying new metadata.

The dataset’s XML archive, containing the OCR of the digitised images, works with three metadata schemes (Dublin Core, custom OCR/XML data, and METS). In the OCRed documents, the METS metadata schema includes, at the beginning of the file, a publication description in Dublin Core with date, title, city, state, country, category, collection and language. It is followed by an OCR structure that divides page content into columns, regions, paragraphs, lines, and words with an associated coordinate, allowing the search terms to be highlighted by users.

The current user interface was designed in-house and released in 2015.

The interface allows users to perform simple searches by title, year or place, or advanced searches which combine the previous options together with language, type of access and frequency of publication. The interface also includes indexes which allow users to restrict their searches by country, state, city, type of access, language, frequency of publication, title and dates. Users can also search by word, which uses the system’s underlying OCR files, and the results highlight the search terms in the PDF. The interface also allows users to access detailed bibliographic descriptions of the newspaper titles.

There is currently no API available for the HNDM.

The HNDM does not allow bulk downloads or access to any of its files, neither the images nor the OCR. Newspaper titles can be printed or downloaded one at a time as PDFs. However, in both cases the print version is either extremely large, showing only one part of the image, or extremely small, with the newspaper page occupying just a fraction of the PDF page. This renders the print option unviable. Users who would like printouts must go to the HNDM office located in the library.

Materials in the HNDM which are considered under Mexican law to be in the public domain are freely available online. The library worked in close collaboration with the UNAM’s legal team, but it was difficult to determine what is uncontestably within the public domain. The UNAM made the decision to be cautious and so the cut off year was set as 1889. This decision was made a few years ago and should, logically, be updated each year, but to our knowledge this has not been done yet. Newspapers from 1890 onwards are restricted access and can only be consulted from within the library or the university campus. These are clearly indicated in the interface with a padlock icon. The HNDM uses the term “open access” for the newspapers that are freely available, although there are restrictions. Materials can only be used for personal or educational purposes and due credit must be given to the HNDM.

The complete collection can be searched and, in the results, metatextual information is presented with a thumbnail image of the newspaper. Closed access newspapers are indicated with an icon and the PDFs cannot be accessed.

Direct access to the OCR and image files is not available. Open access PDFs cannot can be printed. Digital content cannot be incorporated into any digital platform or application without prior authorisation by the HNDM.