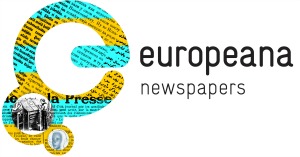 Europeana is a collection of collections, drawing from more than 2,000 cultural heritage partners all throughout Europe. The full Europeana platform contains over 50 million artworks, artefacts, books, films and music from European museums, galleries, libraries and archives.

A thematic newspapers collection within Europeana was established in July 2019. It mainly builds on the Europeana Newspapers project (2012–2015) that was funded by the European Commission’s ICT Policy Support Programme, as part of the Competitiveness and Innovation framework Programme (CIP). The project received an initial €5.2 million with a maximum European Commission contribution of €4.1 million. Europeana Newspapers aggregated metadata for more than 20 million digitised newspaper pages from a variety of European libraries, collected around 12 million page images of digitised newspapers and processed them with OCR and OLR, and developed a prototype portal for full-text search in digitised newspapers at The European Library (TEL). Following the closing of the TEL service at the end of 2016, the newspaper collection was migrated to a “thematic collection” subsite of the main Europeana platform.

Europeana draws from existing databases, so it does not undertake any microfilming or material preservation but relies solely on the capture processes of its project partners, some of which have individual entries within this Atlas.

Europeana draws from existing databases, so it does not undertake any digitisation but relies on contributions of digitised materials from gallery, library, archive and museum (GLAM) institutions.

The main selection criteria for the aggregation of digitised newspapers to Europeana is the conformance with the Europeana Publishing Framework, which details several tiers of quality requirements and recommendations for metadata, text and image content. For inclusion within the thematic collection, the most general requirement is that the data provider populates the dc:type field with one of the following terms: Newspaper Title, Newspaper Issue, Analytic Serial, Newspaper, Journal, or Printed Serial.

Since Europeana is an aggregator platform for digitised cultural heritage, it does not undertake any preservation activities itself, but does act as an additional access site for included digitised newspapers.

Europeana Newspapers is a collection of collections. It assembles digitised historical newspaper content from more than twenty distinct data providers, each with their own data parameters and histories. In total, the Europeana Newspapers collection includes 28,816,750 pages in forty different languages. Because of the multiple origins of the data and the migration process, it now holds data in varying degrees of refinement – while roughly 12 million pages of the originally aggregated 20 million pages have machine-readable full text from OCR, another approximately 8 million pages are only available in Europeana through their metadata. Furthermore, a wide variety of digitised newspaper data that already existed on Europeana prior to the migration of Europeana Newspapers from TEL to the main Europeana platform has since also been merged into the thematic collection.

Images from project partners were provided to Europeana Newspapers in various formats. Since Europeana Newspapers conducted the OCR and OLR for these images, images were only used if they were considered to be of archival quality. For the purposes of OCR/OLR processing, all images were converted to TIFF. In addition, JPEG2000 versions were created for all images to enable display and zooming on the web.

All Europeana Newspapers project data and metadata follows the ENMAP profile, a dedicated metadata profile for digital newspapers based on established community standards METS and ALTO. Full details of the encoding schema (v 1.0, 2015) are available on the Europeana Newspapers project website. For aggregation into Europeana, a special profile for representing full text alongside the Europeana Data Model was created. It is also aligned with the IIIF standard. Europeana metadata has also been released in EDM in XML, EDM in JSON-LD, Dublin Core in XML, and CLARIN CMDI in XML.

In Europeana, users can search for terms across the full text or the newspaper title. It is also possible to filter by collection, media, rights availability, providing country, language, aggregator and institution. Users can browse content through date, title, or a map. The search results display the issue-level metadata of the content-providing libraries, with varying degrees of information: full text and newspaper page image are displayed, with links to view the original in the source library, if available.

Europeana provides several APIs to use with the newspaper collection:

Documentation and examples of use are available.

All titles are freely searchable through Europeana and each individual object contains information about its terms of use. However, full access to recent twentieth-century content is problematic owing to copyright. Europeana Newspapers has developed a “Roadmap for Improving Access to Newspapers” to urge policy makers to consider more open licences for digitised newspapers.

Item-specific information about terms of use is also available via the API.

Most of the newspapers assembled by Europeana Newspapers are dedicated to the public domain with all metadata being released under a CC0 license and may therefore be re-published freely. See individual terms of use for further details.