A daily broadsheet newspaper in the nineteenth century would typically have six or seven columns, though in the UK the abolition of Stamp Duty in 1855 meant that the structure of the newspaper changed quite dramatically, as advertisements were no longer used to bulk out the page count but instead were integrated into the paper itself. Illustrated newspapers might have two or three columns and were generally published on smaller paper.

As a synonym for regular feature or article:

“In order to answer this question we must track the journey of the joke from its origins in New York, through its refinement in the papers of the mid-West, its perfection in a Wild West weekly, its journey across the Atlantic, its circulation in the humour columns of the British press and finally to its leap into wider popular discourse” [Nicholson 2012, 274]

“The column consists of about a thousand words, dominating an entire page and giving it a substantial weekly presence.” [Cogdill, 183]

“The Times, the Daily News and the Morning Chronicle are typical of the daily broadsheet, having either six or seven columns to a page with densely set news items.” [DNCJ, MBT, 576]

As a physical layout indicator: 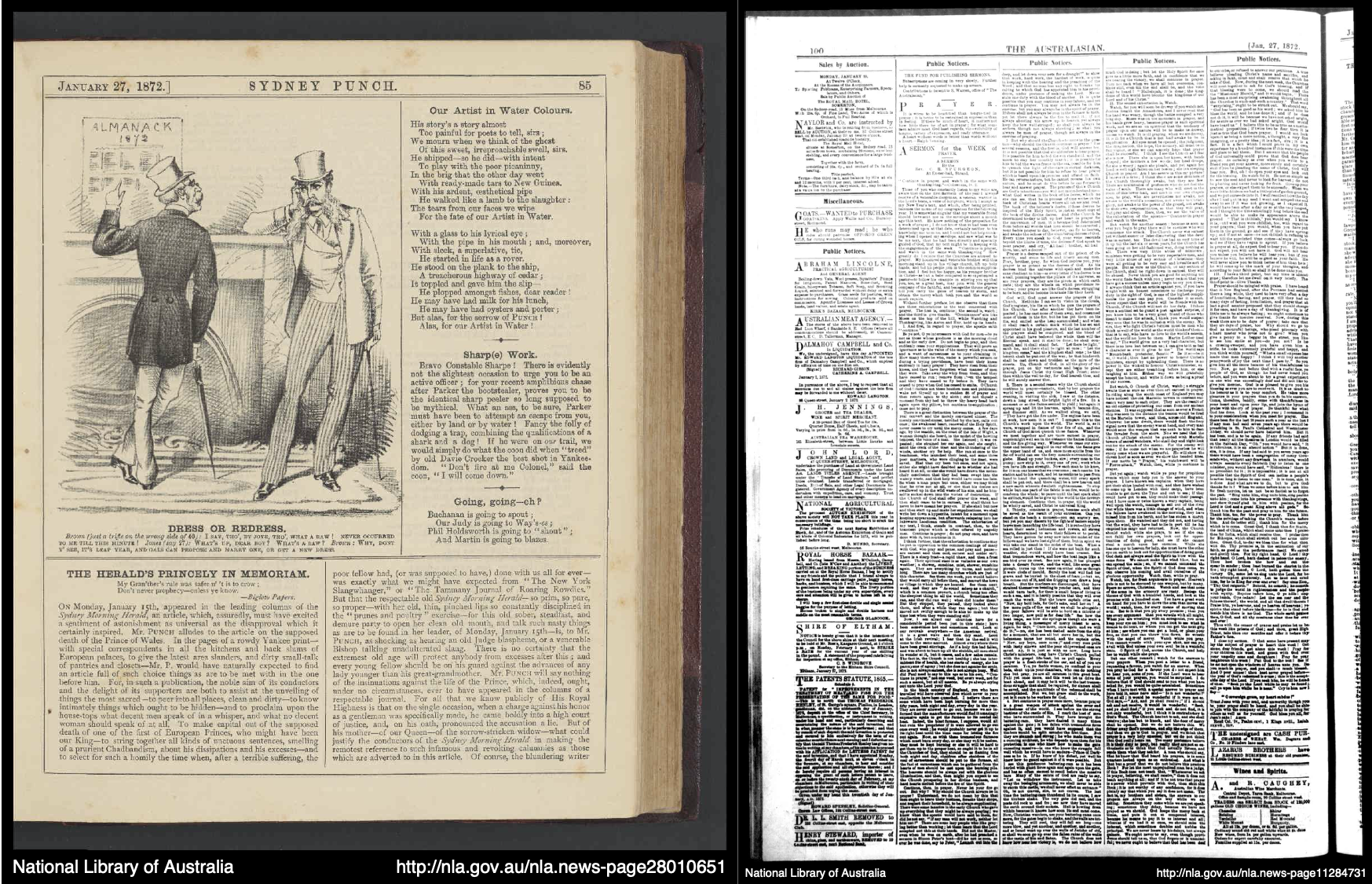 Comparison of two page layouts from 27 January 1872 from Sydney Punch (page 3) and The Australasian (page 4). Trove.

“This delay roughly mirrors the life cycle of two other jokes published in the same column, both of which circulated in the American press during the first half of January.” [Nicholson 2012, 274]

“Columns are basic units of design in newspapers and periodicals that distinguish serials from most printed books and predate later additions of page design such as tiered headlines, subheads, font variation and imaginative layout.” [DNCJ, LRB/AK, 134]

“Yet, in the same column, Crane could write straightforwardly and even respectfully of the professional fighter, James J. Corbett, then training at Asbury Park.” [Kwiat, 104]

“During that time period, at least, the paper was published in eight-page editions, with each page containing four columns.“ [Simons, 389]

“Two columns over from ‘The Horrors of Delirium Tremens,’ in the same number of the Missouri Democrat, we read of a man bitten by a rattlesnake.” [Branch, 578]

“Mr. Brontë had also made several contributions to the Mercury’s columns, the earliest being a letter printed on December 15, 1810, in which he protested against the wrongful imprisonment of a Dewsbury man.” [Rosengarten, 591]

“Like The Daily Courant, The Observator and The Flying Post, it was printed in double columns, on both sides of a single folio sheet of paper; and it came out, like The Evening Post, The Post Boy and The Review, three times a week–on Tuesdays, Thursdays and Saturdays.” [Bateson, 155]

As a synonym for section (used in plural)

“There must not be ‘unpleasant’ jokes; otherwise the babies’ food and the condensed milks will not come into the advertising columns.” [E.T. Raymond, Portraits of the Nineties (T. Fisher Unwin, 1921), 305, qtd. in Nicholson 2012, 282]