For most of the nineteenth century, the front page of major daily newspapers would include classified adverts rather than headlines in a larger font size; in the UK, The Times continued this practice until the 1960s. The British New Journalism of the 1870s and 80s saw the introduction of headlines to catch readers’ attention. Type-revolving presses, used in the 1840s and 1850s, made it impossible to have headlines across more than one column until the rotary presses made it possible to design a layout horizontally rather than simply vertically. Even when the technology allowed, Australian newspapers were similarly reluctant to adopt them until the end of the century. The term itself was more commonly used in the nineteenth century for book layouts, referring to the running title, pagination and other information at the top of the page. Within the pages of the newspaper, article titles were often fixed from issue to issue (for example “Advertisements & Notices”, “Provincial News”), comparable to the idea of a regular column today. Because titles were not commonly used (they were more common in periodicals), many databases do not zone by article but by page. Gale segments by article, but with older newspapers they do not try to figure out where one article starts and ends. Many providers hand-key and check titles and headlines.

“Newspapers at the beginning of the nineteenth century made no effort, in their vertical display, to put a headline over the main story or to make sure that the main story began at the top of a page.“ [Evans, 23]

“New Journalism pioneered the use of headlines to give an eye-catching typographical emphasis to the latest piece of important news.” [DNCJ, AK/MaT, 450]

“They serve, first, as a signpost for readers, telling them what the most important stories are; those with the bigger headline size.” [Franklin, 226]

“Beneath a headline, ‘Return of the North End team. Brilliant ovation from twenty-seven thousand people’, the Herald reported that the Public Hall ‘was packed as it has never been packed before by an audience representative of all classes of the community’, emphasising the unifying nature of the occasion.” [Hobbs 2018, 343]

“The Chronicle again demonstrated its support for Nield with a report (29 Sept. 1894) entitled ‘Labour Meeting at Crewe: Messers Compton and the Factory Girls’.” [Bunting, 141]

“Wilkie Collins, writing in Dickens’s weekly miscellany Household Words in 1858 was more pessimistic, despairing of the quality of the ‘penny fiction weeklies’ that were catering to a vastly increased readership, the ‘Unknown Public’ of the title of his now famous article.” [Shattock 2017b, 3]

“Nevertheless there are several ways to detect the headline in an indirect way, by utilizing the background knowledge which is set out here. E.g. repeated section headings, the mentioning of the place and date of the news and the copyright statement may be utilized for this purpose.” [Europeana Newspapers 2015, 38] 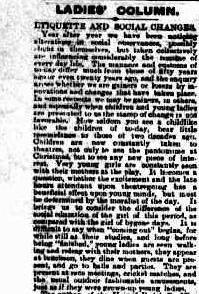 “This penny satirical journal was started during the Reform agitation, and originated those periodical comments on magisterial decisions which subsequently became general in the newspapers, under the title ‘Justices’ Justice’.” [Vizetelly, 1.218]

“I supplied dramatic criticism, and a column of ‘literary and artistic gossip,’ my first attempt at anything of the kind.” [Yates, 1.265-66]

“The subjects I wrote upon in the leading column of the Daily Telegraph were, comparatively speaking, innumerable…” [Sala 1895, 1.330]